Skip to content
How to Prevent Rust Without Paint, Oil or Grease: Try VCI for Dry Rust Prevention That Works Read more ›
1-800-365-1117

They say that if a picture is worth a thousand words, then a video is worth a million. While we can’t verify those numbers, at ARMOR we do know the power of video. In fact, we’ve harnessed that power to show you ARMOR’s new ASK JERRY online rust tool and all the ways that it can help tackle rust issues. ASK JERRY can help with everything from providing rust-prevention packaging recommendations for a new project to tips and strategies to eliminate an existing rust problem.

We know that explaining the essential functions of ASK JERRY and how it works online is done most easily by showing you ASK JERRY while it is up and running. So, that is exactly what we’ve done – forget the old pen-to-paper approach and set the keyboard aside – we’ve created a video to give you a peek at ASK JERRY so let’s roll (aka, click on the video player below to view!)

To see ASK JERRY live for yourself, visit the ARMOR website. If you have questions or need assistance, contact your ARMOR sales representative for assistance.

We’ve taken everything that you may believe is essential to the process of removing rust from iron and steel and we have thrown it out the window – it’s as if ARMOR’s Metal Rescue is the 8th wonder of the world. There’s no grinding, sanding, or scrubbing and there’s no use of harmful or corrosive acids, alkalis or solvents. Want to know how it works? Lend us your ear for just 4 minutes and we will explain how Metal Rescue is a clean, safe and easy rust remover ideal for use in an industrial setting.

For more information on Armor Protective Packaging and its full line of packaging products, visit the ARMOR website or contact your ARMOR sales representative.

Armor Protective Packaging® worked with TREMEC plants in the United States and Mexico to analyze and solve a costly rust issue with its transmission components.

Before ARMOR’s involvement, TREMEC used a combination of rust prevention liquids and VCI products manufactured and supplied by a competitor.  Unfortunately, the results were not as desired and TREMEC was left with sporadic rust and corrosion on transmission components.

Once ARMOR was on the scene, they worked with TREMEC to collect evidence on the different conditions that its transmission components were exposed to. The findings and results were used to develop ARMOR’s rust prevention solution for TREMEC – one that reduced costs and increased savings!

The verdict is in and this story’s happy ending is even happier when ARMOR’s rust prevention solution proved to be the key in managing corrosion not only with TREMEC but also with its supply chain.

Download our ARMOR Rustimonial for a just-the-facts overview of this success story.

At ARMOR we don’t take the start of a new year or a new decade lightly. Here in ARMOR-land, we’re kicking off 2020 with a new website and the debut of our ARMOR corporate video.

We unveiled our new ARMOR Eradicators of Rust website at the end of 2019 under the headline: New Look, New Content, New Attitude. We gave the site a complete overhaul and it emerged with new photos and graphics, expanded content on our product pages and more downloadable resources, all presented in a simple, straightforward, no-nonsense manner.

And, while we don’t consider ourselves the type to go on and on about ourselves, that was exactly the goal of our corporate video – to tell the story of ARMOR and the people behind the ARMOR name. You could call it a biography, or action/adventure, or even a comedy, but in the end, it was an ARMOR team effort. Disclaimer: no ARMOR employee was injured during the filming of this video, in fact, everyone was given their moment of “fame” in front of the camera. Better yet, this new ARMOR corporate video (formally titled Armor Protective Packaging:  The Whole Story) highlights what we do and why we do it.

Instead of telling you about it, we’ll let both the new website and the video do the talking. Without further ado, pull up a chair, grab some popcorn and feast your eyes on all the newness of the new year that ARMOR has to offer!

We keep it short and sweet in the ARMOR Solutions tutorial video above that outlines the key elements of ARMOR POLY® VCI film and ARMOR WRAP® VCI paper. In less than 3 minutes you will learn the features and benefits of both products as well as how to determine whether ARMOR VCI poly or VCI paper (or a combination of them both) is the best match for your specific rust prevention application.

For more information on Armor Protective Packaging and its full line of packaging products, visit the ARMOR website or contact your ARMOR sales representative.

It is rare when two great forces come together and find synergy. But rare is exactly what you get when you combine Armor Protective Packaging® and its renowned VCI rust-prevention technology with Laddawn and its “better way to buy” online marketplace.

Effective September 3, 2019, ARMOR and Laddawn officially consummated their new partnership with the debut of ARMOR rust prevention/rust removal products available for purchase on the Laddawn website.

While Laddawn has traditionally been known as a manufacturer of polyethylene (poly) bags and film, they recently made efforts to expand their inventory. Joining forces with ARMOR and adding the entire ARMOR Stock & Ready® product line gives Laddawn the boost in inventory they are looking for while offering customers the benefits of ARMOR’s rust preventative packaging materials – everybody wins!

Through the magic of the Laddawn “better way to buy” online marketplace at Laddawn.com, distributors can order items from the ARMOR stock list of its top-rated rust prevention and rust removal products under the categories of VCI WRAP, VCI POLY, VCI Liquids and VCI Shield. For ARMOR customers, the choice is yours – order ARMOR products at Laddawn.com or continue to place your order with ARMOR directly — either way, ARMOR and Laddawn are making it easier to source rust prevention packaging.

When you are the best, you want to partner with the best and for Laddawn and ARMOR it was love at first sight. Both share a passion — borderline compulsion — to provide a customer experience that is no-nonsense; easy; and exceeds expectations. In working together, ARMOR and Laddawn offer customers easy ordering, rust prevention products fueled by ARMOR VCI Nanotechnology and enhanced technical support – it’s nothing short of a rust prevention powerhouse. 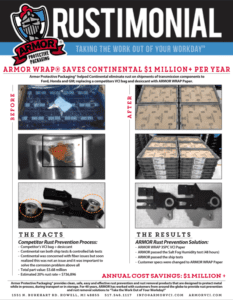 Armor Protective Packaging® recently worked with one of Continental’s largest plants to solve a costly rust issue with its transmission components.

Before ARMOR’s involvement, this Continental plant was using a competitor’s rust prevention product to protect metal transmission components during shipment to its customers including Ford, Honda and GM. The competitor product offered poor results. The metal parts were rust free when they shipped from the Continental plant but when they were delivered there was visible rust that had developed during transport.

ARMOR joined with Continental to study the conditions contributing to its rust problem, paying close attention to their additional concerns about fiber issues. Ultimately, ARMOR proposed that Continental wrap its transmission components in ARMOR WRAP® paper with a poly coating.

Continental conducted both humidity and ship testing and ARMOR WRAP paper proved to be highly effective in rust prevention. The rest as they say is history – with ARMOR WRAP on-the-job, Continental reports annual cost savings of more than $1 million!

Click on the ARMOR Rustimonial pictured above for a just-the-facts overview of this success story.

Problem: Our customer manufactures large engines and components for the power generation and heavy equipment industry. During the shipping and delivery process of their largest engines to customers, the engines were experiencing rust and corrosion. While the manufacturer was using a competitor’s heat shrinkable, heavy-duty VCI film to prevent rust, the film failed to provide adequate barrier protection. The result was the formation of rust and corrosion on key components of the engine.

Results/Savings: ARMOR’s recommendations on both the process for protecting the manufacturer’s engines (training on application techniques) as well as the products (the use of SEA Film) resulted in the elimination of the rust and corrosion. ARMOR’s recommendations also resulted in a 27% reduction in materials, a materials cost savings of 40% and a 35% reduction in labor.

For more information on Armor Protective Packaging and its full line of rust prevention packaging materials, visit the ARMOR website or contact your ARMOR sales representative.

Last month, Armor Protective Packaging® (ARMOR) hosted a community fundraising classic car show with all proceeds to benefit the local chapter of the Salvation Army.  The event, officially titled the ARMOR Great Pumpkin Classic Car Show, was held in Howell, Michigan, home to ARMOR’s international headquarters and it was a big success.

On October 13th, a record-breaking 450 cars registered and were onsite to participate; 61 awards were given; and most importantly, a total of $17047.10 was raised for The Salvation Army of Livingston County.

While this year was the 11th year of the car show, it was the first year that ARMOR took on the role as event organizer and founding sponsor.  “For ARMOR it just made sense to combine our love of community and The Salvation Army of Livingston County with our expertise in rust prevention and rust removal products — perfect for classic car restoration.  It was a great day!” said Dave Yancho, Vice President of Sales and Marketing for ARMOR.

In 2015, ARMOR formalized its commitment to service and support of the community with the establishment of its employee volunteer program named VALOR — Volunteers of ARMOR.  As part of VALOR, all ARMOR employees are given 24 hours of paid time off to serve and volunteer. Most recently, VALOR secured its 501(c)(3) designation and incorporated as a non-profit organization.

The success of the ARMOR Great Pumpkin Classic Car Show is shared with the community members, groups and businesses from the area that were also an integral part of the event.  The day kicked off with the National Anthem sung by a local high school choir along with a jet flyover piloted by an area resident.  Sponsoring local businesses attended and manned displays, local food trucks and vendors provided food, a live band entertained during the lunch hour and show attendees made donations to Salvation Army in lieu of any spectator admission fees.

Take a firsthand look at all of the show’s highlights in the official ARMOR Great Pumpkin Car Show 2018 recap video.

“It was so gratifying to see the months of planning and prep work pay off with such a successful show. The weather was beautiful; the attendees were great; the cars were spectacular; and the volunteers were inspiring, but the best part of hosting such a successful community event is knowing that all of the proceeds will support our local Salvation Army of Livingston County in their efforts to ‘Do the Most Good,” Yancho added.

The Armor Protective Packaging® team let out a collective “hip hip hooray” when it recently received final approval from Volkswagen for ARMOR WRAP® VCI Paper and ARMOR POLY® VCI Film.  This granted approval is for all Volkswagen sites worldwide as well as for all Volkswagen internal and external sub-suppliers.

“Obtaining these approvals was no easy feat, the Volkswagen testing protocol is very rigorous,” said Robin McConnell, President, Armor Protective Packaging.  The official Volkswagen Certificate clearly states, “In accordance with the VW procedure for examining the chemical composition and effectiveness of VCI packaging for the corrosion protection of steel, Armor Protective Packaging is herewith granted clearance in accordance with the criterion stipulated by Volkswagen’s clearance procedure.”