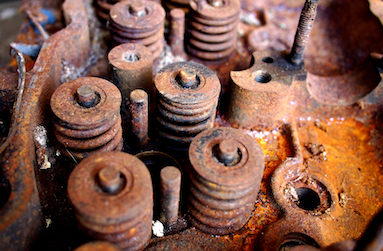 Rust can quickly become a big problem. It ruins the functionality and stability of important machinery and it can cost your business thousands. Knowing how to prevent rust effectively can save you money and prevent serious problems. As with many things, some small preventative measures upfront can save you lots of money, time, and frustration later on. We’ve collected the best ways to prevent rust, so you can find a strategy that works best for your equipment or parts.

How to Prevent Rust in Any Situation

Some of these, such as stainless steel, are made to prevent rust completely. Though they are certainly not completely corrosion resistant, they will rust much more slowly. Other alloys, such as COR-TEN steel, will acquire a layer of rust, but will then stop rusting, under the right conditions.

Changing the composition of the steel also changes its toughness, conductivity, appearance, and many other properties. It is important to consider how to prevent rust, but also make sure that the steel alloy is suitable for the application. Furthermore, consider the welding techniques used and the surrounding environment, as these will all affect the rate of corrosion.

Most gun owners know the importance of keeping firearms well-oiled, even when the weapons are not in use. Oil not only lubricates metal parts and allows them to move with less friction, but oil also forms a protective barrier against rust. The principle here is pretty simple; with a coating of oil, moisture can’t react with the iron in the metal and cause rust.

While a coating of oil can be a simple and effective way to prevent rust, it’s certainly not perfect. Oil also makes it hard to get a grip on an object, and it can cause parts to slip or come unbalanced. It can also be dirty and unpleasant to work with. Finally, oiling must be done repeatedly, which takes time and energy.

Some products are specifically made to prevent rust. These products work on the same principle as oil—creating a protective barrier against rust—but they don’t leave residue behind. For metal parts or components that need to stay clean or provide a solid grip, a rust preventative dry coating is ideal.

Dry coating rust prevention products such as ARMOR’s Dry Coat Rust Preventative can be applied via spray, dip or wash. Once they dry, the protective barrier is in place. The metal won’t look or feel any different, so its applications remain the same. Dry coatings can also be used in combination with other ways to prevent rust. For example, you might use a dry coating over a painted or powder coated object to increase the level of protection.

Paints will also create a protective layer over metal objects and prevent moisture from reaching them. Of course, no barrier can completely stop moisture from getting through, but painting can be a simple and easy way to slow down rust. If you already want to paint the object a different color or get a different finish, this is an ideal solution.

It is important to use the right paint to prevent rust. The paint must be able to adhere to the metal, so be mindful of what type of paint you’re using as well as any finishes already placed on the metal. You’ll also need an oil-based paint, not a water-soluble paint if you expect the piece to see excessive moisture or contaminants. Finally, be careful of welded joints or bolts. If there are any weak spots in the painted layer or any crevices not filled, these areas will start to rust.

GET YOUR RUST ANSWER NOW

The best way to prevent rust may also be the most obvious—keep the object away from moisture. Water reacts with iron to form rust, so an environment with no moisture will not create rust. However, keep in mind that even regular air contains some moisture in the form of humidity. To completely prevent rust, you’d need an air- and water-tight seal. This, of course, would make the object difficult to use, so it makes more sense to prevent rust during storage or shipping.

Galvanizing applies a protective coating of zinc over iron or steel. Since zinc corrodes about 30 times slower than iron, galvanizing can be a cheap and effective way to prevent rust.

Like all of the ways to prevent rust, galvanizing has limitations. The coating of zinc won’t stand up to harsh environmental forces like acid rain or salt. Galvanizing also changes the outward appearance of the metal, and the extra layer can cover up parts of the component, such as the threads on a screw.

The process of blueing steel actually creates a new layer that is similar to rust, but much less damaging. Blueing creates a layer of magnetite, also called black iron oxide, and gives metals a black or namesake blue appearance.

Blueing is usually accomplished by applying high temperatures and a salt solution. This process is commonly used to economically protect firearms from rusting. Blueing works best when the steel is also regularly oiled.

Powder coating is often used to quickly “paint” an object in an assembly line. First, static electricity binds a powdery substance made from acrylic, polyester, epoxy, polyurethane or something else to a metal object. Then, the powder melts in a furnace into a uniform, solid layer. Since there’s no liquid involved, powder coating is ideal for certain finishes or parts.

Powder coating, like painting, covers a metal component in a protective layer. This layer will prevent moisture from reaching the metal and therefore prevent rust. For powder coating to effectively prevent rust, the coating must be intact. Any weak areas will expose the metal and create an entry for rust.

VCI Packaging is an easy-to-use, clean and dry packaging option for preventing rust from metal and metal parts. Vapor corrosion inhibitors (VCI) are a type of chemical compound used to protect ferrous and non-ferrous metals from rust and corrosion that are infused into packaging materials including poly films, paper, emitters, chipboards, desiccants and many other components.

When metal parts are properly stored with VCI Packaging products, VCIs activate and fill up the vapor space inside the packaging. The VCI ions form a shield of protection on the surface of metal that displaces moisture and eradicates rust. VCI Packaging safely prevents corrosion on protected metals without the need for messy grease, oils, protective coatings or other time-consuming methods.