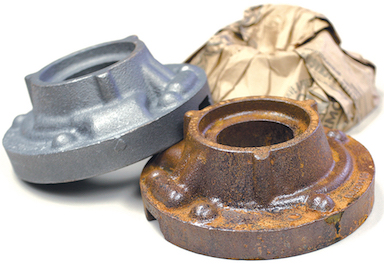 If you work with iron or steel parts or equipment, you’ve almost certainly had to deal with rust. Rust can ruin the metal parts you need, cause machinery to malfunction, and create safety hazards. There’s not enough time in the day to sand and scrub rust off, but you still need your metal parts and machinery in top shape. In this post, we’ll explain how different types of industrial rust removal acids and water-based solutions work, so you can find the best product for your needs.

Rust occurs when iron and other ferrous (containing iron) metals oxidize. When oxygen, water, and iron meet, a subtle and invisible chemical process occurs that causes electrons to move and turns iron into iron oxide, also known as rust. Salt water in coastal regions or from winter road salt, as well as acid rain in some urban or industrial areas, are known contributors that speed up oxidation.

Do All Metals Rust?

Oxidation is one type of corrosion that can occur on metals, and many metals suffer from oxidation. However, rust is specific to metals containing iron, which includes all types of iron (wrought iron, cast iron) and steel (carbon steel, stainless steel). Other non-ferrous metals like aluminum, copper or lead, can corrode, but they don’t actually rust.

So what does this mean for industrial rust removal? Understanding what causes rust can help to understand how to get rid of it, and which methods work better than others, and why.

How Does Rust Removal Work?

Industrial rust removal for removing rust from pipes, rebar, or machined parts includes all of the following methods:

There are many industrial rust removal products that might work for your metal parts or machinery, and what dissolves rust best will depend on several factors. The severity or level of rust, the type of metal part, the size and shape of the part, the quantity of parts and the type of facility you have will all impact what dissolves rust best. It’s important to consider safety, disposal of the rust removal solution, time and other factors.

How Do Strong Acids Work for Industrial Rust Removal?

Strong acids and strong alkalis can remove rust quickly, however these caustic chemicals pose many health and safety risks and require that the user observe strict safety precautions. Strong acids will dissolve rust, but they will also dissolve paint, finishes, and sometimes even the metal itself. Hydrochloric acid (which is also called muriatic acid in its diluted form), as well as phosphoric acid and sulfuric acid may be used in rust removal formulas using strong acids. These are mineral acids, and they are highly corrosive, especially in concentrated forms. Strong alkalis work in a similar way, but on the opposite end of the pH spectrum.

Strong acids work by dissolving rust. Many acid-based rust removal products are gel formulations. Once applied, if the gel remains on the metal too long, it will start to dissolve it, causing pitting. While mineral acids clean away the outer layer of rust, they also put the underlying metal in a reactive state, making it susceptible to “flash rusting” unless it is otherwise sealed or neutralized.

Even when mineral acids are diluted in water or other substances, they are dangerous to work with and can severely damage skin, irritate the lungs, and cause other health problems without proper safety precautions. These chemicals are corrosive and toxic, so they must be disposed of safely, especially in large amounts.

Industrial rust removal products containing strong acids may be ideal for serious rust problems that must be resolved quickly. However, these products must be carefully monitored and safety precautions carefully followed. Proper ventilation, safety goggles, gloves, and careful application are essential to keeping users protected. 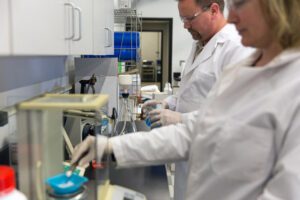 How Do Weak Acids Work for Industrial Rust Removal?

Despite their name, a weak acid does not mean a weak reaction. Since weak acids occur naturally in the environment, they are far less toxic than the mineral acids listed above. There are a variety of weak acids that will react with rust and remove it, and each one works a bit differently. Tannic acid, oxalic acid, citric acid, and Ethylenediaminetetraacetic acid (EDTA), can all be used as an industrial rust remover. These acids are naturally occurring in nuts, vegetables, and fruits, or used as an additive in medicines and foods.

Weak acids utilize a process similar to strong acids, except their reaction is more gradual and less volatile. Though weak acids can still be harmful in concentrated forms, they are nowhere near as dangerous as mineral acids. Industrial rust removers using weak acids are typically found in bath or gel formulations.

Weak acids—like oxalic acid—can be hazardous in a highly concentrated form, but they are naturally-occurring and carbon-based, so they are less toxic and less corrosive than mineral acids. Even so, caution is required when working with weak acids as they still present safety issues both for humans and the environment. Since the chemical process differs from mineral acids, oxalic acid and other weak acids lower the risk of metal flash rusting, however, it is still a risk. 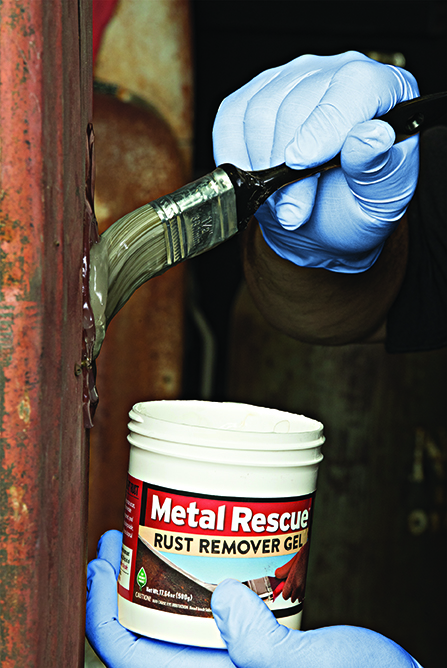 How Do Acid-Free, Water-Based Solutions Work for Industrial Rust Removal?

It is not only acids that have the ability to remove rust. Acid-free, water-based industrial rust removers utilize a slightly different chemical process to react specifically with rust and remove it from the metal. While acids break down and dissolve rust, acid-free, water-based rust removers draw the rust away or lift it from the metal. This process is generally accomplished through chelation.

Chelation causes molecules within the rust removal solution to bond with the rust and draw it away from the underlying metal and into a substrate. Often, this involves the use of a rust removal bath. The rusted metal parts are soaked in the bath allowing the solution to draw or lift the rust off the metal and into the bath, and the rusted part comes out clean. These industrial rust removal products are also offered in a gel form.

Which Rust Remover Should I Use?

Now that you have some familiarity as to how different industrial rust remover products work, it will be easier to choose the right one. Look at the active ingredients as well as the recommended safety and disposal precautions to see whether the product uses strong acids, weak acids, or an acid-free, water-based formulation. Follow the product’s application instructions carefully; leaving the rust remover on too long can damage the underlying metal, but not leaving it on long enough could result in poor results. With the right choice, you can successfully remove rust and bring rusted metal parts and equipment back to like-new condition.